There are currently 0 users and 8 guests online. 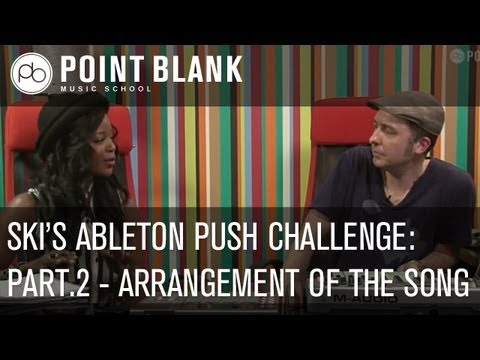 The main goal of the first part of my Push Challenge was to create the seeds of a vocal track from scratch using Push, while trying not to look at the computer screen at any point. I'd never met vocalist and ex Point Blank student Viv May before, so I had no idea how the session would pan out. Thankfully, it went really well and Viv came up with some killer vocal lines.

As promised in the broadcast, I wanted to make a part 2 video to show how to take these initial ideas and start turning them into a finished track. For the live session we used a standard SM58 dynamic mic together with a reflexion filter to cut down on ambient noise from the speakers, but afterwards we re-recorded the vocals using a better quality condenser mic together with headphones. Viv had some new harmonies and a bridge section that she was keen to add as well.

I decided to record these new vocals directly into the arrange page of Live as I generally feel more comfortable recording in the traditional linear way. When it came to arranging however, I realised I could make use of Live 9's fantastic new 'Consolidate Time to New Scene' feature which allows you to grab whole sections of the arrangement and place them back into Session view. You can then build up the arrangement using Scenes, and 'Jam' the structure back into the Arrange page.

After building a basic arrangement, the next stage is to start getting deeper into the production, which might well make up the next part of this video series!

You can check out Part one of the challenge here...